Yarver Bakema is Vale's gym leader, responsible for the Vale badge. He specialises in Normal and Fighting pokémon. He can be considered Jagdish's 'second in command' and has the unwavering backing from all gym leaders even in the cases Jagdish himself does not, which he uses to mediate between Jagdish and the less eager participants of the gym circuit setup. He's in his mid-thirties.

Carrying with him a constant, slight air of bitterness, as if he had just barely transitioned from an experienced realism over to light pessimism, Yarver does not really come across as someone with much of a sense of humour. He takes very much of the world seriously - but equally, even though he rarely laughs about jokes, he is almost never offended by people's antics.

He has a certain softness to him, holding a dislike for vulgarity and violence, though his wariness gives him a vaguely thug-like impression until he actually opens his mouth and speaks. He considers himself diplomatic and peaceful and enjoys competition only if no one gets hurt - though that he takes much joy out. Enthusiasm is something almost entirely foreign to him, though concepts he supports find themselves riveted to an unshakable foundation of almost cult-like conviction. Since he dislikes arguing, however, he does not preach his beliefs, instead simply picking his friends carefully.

He's known in Vale as, primarily, kind-hearted and fair. Of course, the inhabitants of Vale don't know about Taqnateh as he does - they would quickly change their opinion of him if they knew what he's subscribed himself as a servant to.

Words that can be used to describe his air are spiritual and ritualistic. He certainly manages to imbue even trivial tasks with a certain reverence and gravity, and truly important ones are approached with deep care and respect.

Yarver tends toward a nocturnal lifestyle.

Yarver has a rather classic sexuality, in that he's got a firm heterosexual leaning and a solidly masculine gender identity. The only thing that puts a dent into the regularity of that is his bi-curious nature, though it's unlikely he'd indulge in that without prompt, as he's not very sexual to begin with (though 'asexual' would certainly be a crass overstatement).

Yarver can be considered a close friend of Jagdish Tsukinaka and would defend him with his life if circumstances demanded. To Yarver, his part in the gym circuit - and the adherance to the legendary Council's wishes - has almost religious qualities.

He has a strange relationship with Dakarai N'Sehla, whom he used to be exceptionally wary of, essentially horrified of his past cruelty. He was exceptionally hard on him for a long time and more or less picked up where Jagdish left off (with his permission), but was quite quick to realise Dakarai's truly learnt his lesson, and while they continue their antagonising relationship in jest, they hold much respect for each other these days, and Yarver would protect the boy with much the same fervour that he reserves for Jagdish.

Loyalties and Animosities in brief

Yarver takes his role as a gym leader extremely seriously and lives the role 24/7, believing it unfit for his purposes to be anything but a role model in any situation.

Yarver's truly preferred gym rules involve no traditional battling at all, preferring games of wit and dexterity to displays of brawn. Sadly he doesn't have as much leeway with it as he would like, being the gym most people visit just prior to Taqnateh, and thus needing to fill a role as a last reminder that this isn't some game. As such, whether he takes the harmless route or actually ends up in a largely traditional pokémon battle (Knock-out only 1/6) only spiced up with additional game rules depends largely on where on the gym circuit people are. If he's not their final milestone before Taqnateh, he might prefer simply playing a timeboxed hide and seek in the streets of Vale.

Yarver Bakema, originally from Pyu Ivvi, has never had a wildly different personality to the one he currently possesses. His respect for pokémon has never been much different, either, though until Taqnateh he suffered the reasonably common misconception that pokémon battling was partly natural to the creatures and that their consent without outside consultation was a sensible cornerstone to his actions. As such, he embarked on the gym circuit with the 'consent' of his pokémon, who certainly loved him very much and were quite afraid of losing his respect.

Taqnateh of course quickly disabused him of this notion. He took his Council hearing in stride (relatively smooth sailing as it might have been, with him literally having no dirt on him other than the aforementioned misconceptions, including a stolid refusal to let his pokémon be drawn into gym leader agreements with him), using much of the session itself to reflect on his actions and their harmful effect, and apologised to his pokémon at first opportunity. The fact they all accepted his apology (with various degrees of enthusiasm, ranging from 'none' to 'feverish') before he walked into his sentence certainly netted him respect, and after it was over - cherishing the sudden peace that came with it - Yarver requested to be allowed to live in Taqnateh for a year.

The request was granted, and he put himself in charge of the place's well-being for the duration of that time, insomuch as it was in his power. Needless to say, it came with many conversations with Jagdish while he was there, and he learnt much about the Arbiter that others are less privy to, such as his birthname and the story of his slow usurpation of the initial Sehto gym circuit. The two have learnt to cherish each other's wisdom - Yarver appreciates the life experience Jagdish has of sheer age, and Jagdish in turn Yarver's phenomenal empathic intuition.

That Yarver would be given the Vale gym was decided quite early into his monk-like life in Taqnateh, and his stubborn adherence to the agreed time allowed preparations for a smooth transition away from Kumura Rhee. He was quickly accepted as an authority figure back in Vale once in instated, proving himself an excellent mediator and a friend to many. 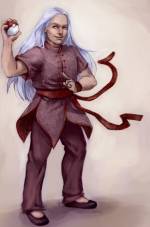 Yarver's tall, broad build is effectively hidden under his most common attire: Most of the time he's seen wearing a robe of tan or khaki colouring, plain but for darkened bands at the edge of his sleeves as well as at the collar, along with two broad lines patterned akin to celtic knots or tribal designs, one running from the bottom of the dark 'V' of his collar down to roughly the height of his lower chest, the other marking the left side of the robe down from height of his hip to the bottom edge, slightly askew to perfect placement, more visible from the front than the back.

His hair is long and a light grey that appears white - it's naturally devoid of pigmentation, but not due to his age. The very tips of his long, straight hair reach down to near the bottom of the small of his back. The light colour of his hair frames a slightly tanned face, from which two grey but lively eyes glint, pupils quite expressive and prone to darkening his eyes substantially if he's in any sort of distress. The rest of his skin is rather pale, owing to his quaint preference of waking hours.

Beneath the robe he commonly wears a short-sleeved, light brown shirt and a darker brown simple jeans.

And in the doorway, with long white hair cascading down his shoulders, stands an entirely unfamiliar person, bushy but narrow brows furrowed, dark eyes latched onto Nikki in scrutiny. His grey top's sleeves are rolled up - his attire reminds of a robe more than anything else. He's silent, studying her contemplatively.

“Nikkita Desdemona Arsaga?” he asks, finally, grimacing slightly. His voice is not unpleasant, but there's a certain edge to it. The detailing on his robe seems tribal, and its lower half is made up of earthy colours. His skin is quite pale - and it looks like he has quite unnaturally long fingers, though it suits him.

“Please come with me,” the stranger says after a moment of gathering himself, sternly, straightening to his full height, which is quite formidable in itself.

He slows his stride to a stop and peers at her, his shoulders sagging slightly, a hint of irritation flitting across his face, as though he were missing something - or someone - and wasn't used to proceeding all by himself. “Yarver Bakema. I'm here from Vale,” he remarks, simply, his fingers curling to fists, before shaking his head slightly and continuing to lead her through the passageways.

Mew, meanwhile, has phased out of existence somewhere behind Nikki. The path that Yarver is leading Nikki along seems considerably more complex than what Jagdish had led her through last time - but eventually, they reach an arena, where Yarver stops, right hand rested against the frame of its entrance, peering up at its ceiling contemplatively. “What name do you know him by?” he asks, quietly, wanting to say something else, but rather informing himself about the name in use before accidentally blabbing something he shouldn't. He seems rather nervous for someone of his stature - he doesn't look like anything ought to make him nervous.

“Suit yourself, girl, suit yourself,” he shrugs, simply, gesturing to the far end of the arena. His nervousness seems to have slowly converted into a bad mood - and despite a certain fragility in his demeanour, something about him suggests that one probably shouldn't mess with him.

Yarver sighs softly as she leaves for the far end of the arena, wrinkling his nose slightly in silent thought. He's quite distracted about Jagdish - he'd rarely seen the man quite so distressed… and it was irking him enough to completely ruin an otherwise frighteningly aloof exterior of his, wielded like a weapon in itself. He seems fairly human, which is a sharp contrast to what most people see in him when confronting him. He regards a pokéball of his own, rolling it in his right hand, scrutinising it.

It is then that a light hand sets down on Devi's shape. “You're looking for me,” a deep, calm voice states, making her swirl abruptly, though not out of shock, simply out of continuation of her rage - though the appearance of the gymleader, or rather, her eyes settling down upon him, is enough to begin to siphon her rage out of the room. She stands before him, taking in his tall shape and the strange attire, along with those long white hair, and a slightly bitter, yet welcoming smile.

“Yarver Bakema,” the man introduces, his voice pleasantly level, his smile persistent, even though his gaze remains fixed on Devi as though trying to hypnotise her into dropping her aggression - though it's more surprising that if that is what he is doing, it's working. “There's no need to raise a fuss. I apologise for being late. I was out of town.” Content with Devi's shoulders sagging slightly to denote a higher level of relaxation, he breaks the gaze and bows his head. “Come through,” he gestures along the central corridor. “Please,” he adds, as if in afterthought, even though his entire body was stating that pleasantry already.

Except where otherwise noted, content on this wiki is licensed under the following license: CC Attribution-Noncommercial-Share Alike 4.0 International